A Place Full Of Stories

A place full of stories

How was it that from 1882, over thirty Italian families from northern Italy came to make their homes here? Discover their stories inside our museum.

Land close to the nearby Richmond River had been selected for farming up to four decades earlier. Here, however, the area was seen by the first Scottish, Irish and English colonists to be waste land, not worth settling.

For the traditional owners, those who have become known as the Bandjalang/Bundjalung, this valued Country was part of a significant travelling route between the hinterland and the coast. The surrounding landscape of Bungawalbyn was a rich and important food place, where some Aboriginal people remained late into the nineteenth century.

However, the subsequent division of land into fenced ‘selections’ or farms meant that the traditional owners were increasingly displaced. We acknowledge this history and acknowledge Elders past and present. 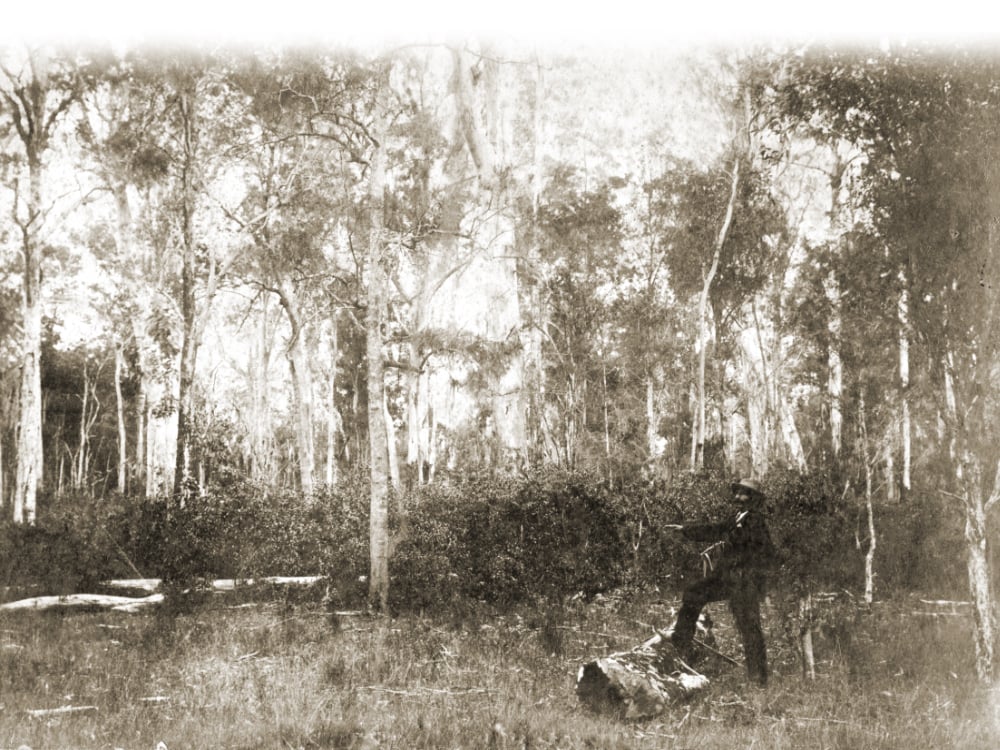 The stories you will find in our museum relate to a group of Northern Italians who arrived here from 1882. They carved out their little farms in a foreign land, making this place their home for the next fifty years.

When you visit our museum, start to your left, with the displays along the front window. Explore stories of the torrid journey that eventually brought the Italians here. They left a land where deep poverty and political turmoil drove them to seek a better place, only to find they had been deceived by an unscrupulous Frenchman.

Following death and despair in the South West Pacific, they were rescued and brought to Sydney. From there, many eventually came north to build a settlement they called La Cea Venezia, Little Veneto. It was then officially renamed New Italy.

Come inside and imagine this isolated settlement hewn out of the woodland. In these sour soils the Italians grew grapevines, vegetables and fruit trees; made salami, cheese and wine kept in mud cellars; built a school and a Catholic Church; played bocce and hosted dances. They were joined by others to become – for a time – a diverse, multicultural community.

Giacomo Piccoli: From the Beginning to the End

One man epitomises what many remember about New Italy.

Giacomo Piccoli lived alone on his property ‘Paradise’, well after signs of a settlement had disappeared.

He tended his grape vines, silkworms, and as many as 300 chickens, until his death in July 1955. He was 88 and the last person from the Marquis de Rays expedition to live at New Italy.

While relatives and friends owned cars and trucks by then, Giacomo still proudly drove his horse and sulky to Woodburn where he sold his eggs and bought supplies.

Among the hens and wildlife on his isolated block, how did he also manage to grow large collections of ‘sweet-scented pink carnations’? 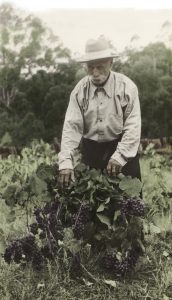 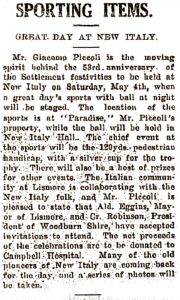 Sports Days and the Park of Peace

In particular, Giacomo is remembered for his annual event to commemorate the settlement of New Italy.

It began as a sports day. Then in 1937, Giacomo officially set aside land on his property for a ‘Park of Peace’. Trees were planted each year to commemorate individuals or events he regarded as significant to the settlement.

Sir Henry Parkes was among those honoured, known to the Italian settlers as ‘the father of New Italy’. Look further into the museum to find out why.

When this complex was built in the 1980s, the spirit of Giacomo’s dual call for world peace and gratitude to Australia for accepting the desperate foreigners, was replicated in the Park of Peace on the southern side of this property.

Your ticket for the: A Place Full Of Stories

A Place Full Of Stories