This phase of the New Italy history extended from 1882 into the early 1930s, and spanned the eras of establishment, community prosperity and decline of the New Italy Settlement. By 1885 forty families had settled in the area later known as New Italy. Despite the land being fairly poor on their selections, the New Italy settlers strove to succeed and through hard work and perseverance they created a flourishing farming community. 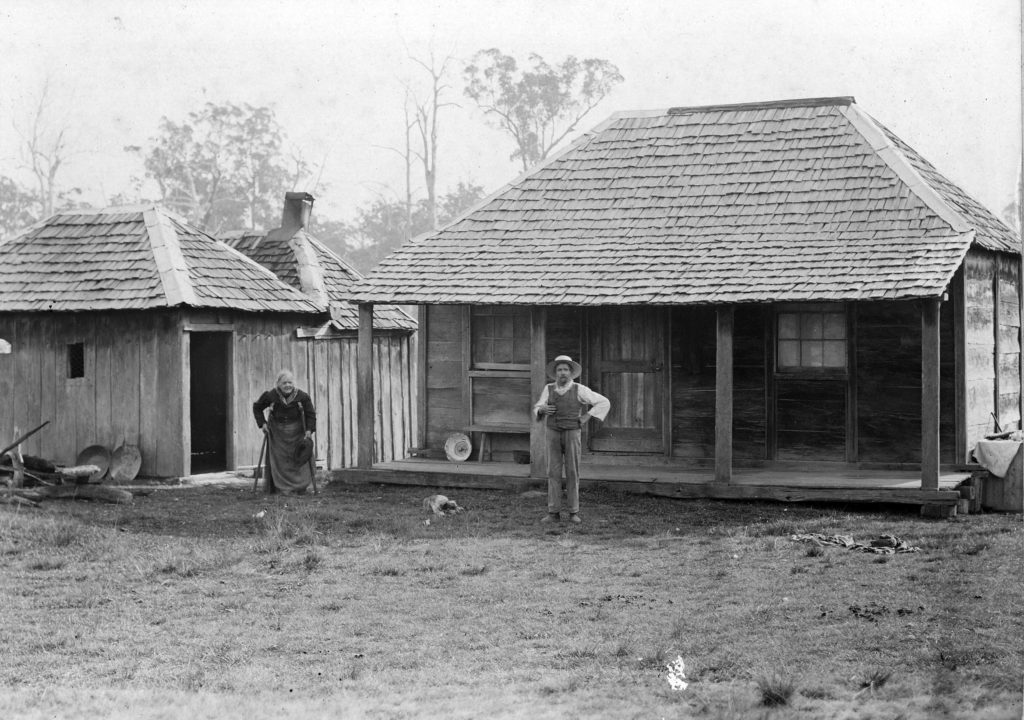 Mr & Mrs A. Nardi were among the first settlers and are pictured
here in front of their new home, one of the first houses to be built at the settlement

The Italian settlers were mostly agricultural labourers, accustomed to the small-scale intensive cultivation practices in Europe, where 40-60 acres was ample acreage to make a living. The settlement was also unique to others in the area being located where no permanent watercourse flowed. This meant that the settlers had to dig wells and initially found water at a depth of 8 to 12 feet.

The first arrivals to the settlement lived adjacent to the Richmond River at Swan Bay and traveled up to 6 miles every day on foot to their selections during construction of their homes which they built from materials available from their selections. Some of the houses in New Italy have been described as exhibiting ‘European traditions in peasant housing’. Mud brick and pise construction became a feature of the settlement. The majority of houses had partial or full cellars to store wine, cheese and salami. Some houses were also two storey and at in least two of these houses the top floor was used for dancing and accommodation. 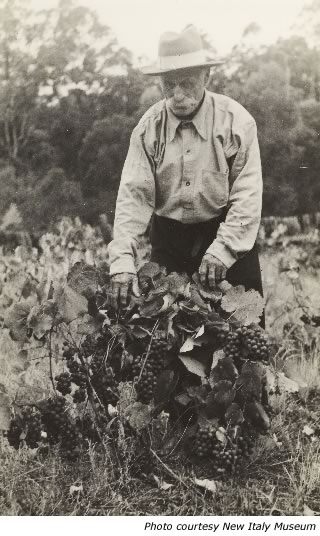 When a travelling correspondent for the Sydney Tribune visited the settlement in late 1883 he found hospitable, amiable and interesting people growing fruits and vegetables including grape vines, melons, lemons and pumpkin. Indeed Clifford (1889:14-22) writes extensively on the diversity of agricultural and horticultural pursuits attempted at New Italy during the first years of settlement including: the getting of railway sleepers, the production of fruit trees such as lemons, apples, loquats and peaches; the cultivation of maize, oats, barley, sugarcane and tobacco, the growing of grapes and the making of wine, and the production of vegetable crops particularly sweet potato but also including onions cabbages, lettuce and peas. Significantly by 1889 nearly every homestead had from half an acre to 2 1/2 acres under grapes (Figure 4) with “the black hambro being the principle (grape type) grown” (Clifford, 1889: 16).

Among the first families were the Caminottis, Pezzutis, Nardis, Spinazes, Gavas, Roders and the French Palis brothers who had joined the Italian settlers at New Italy. In those early years the limitations of the land meant that the men were often away for 6 or more months of the year. The male settlers funded their activities by taking work in the district, particularly in the sugar cane fields and the CSR Sugar Mill, which had commenced operation at Broadwater in 1881, where they were known as reliable and hard workers. 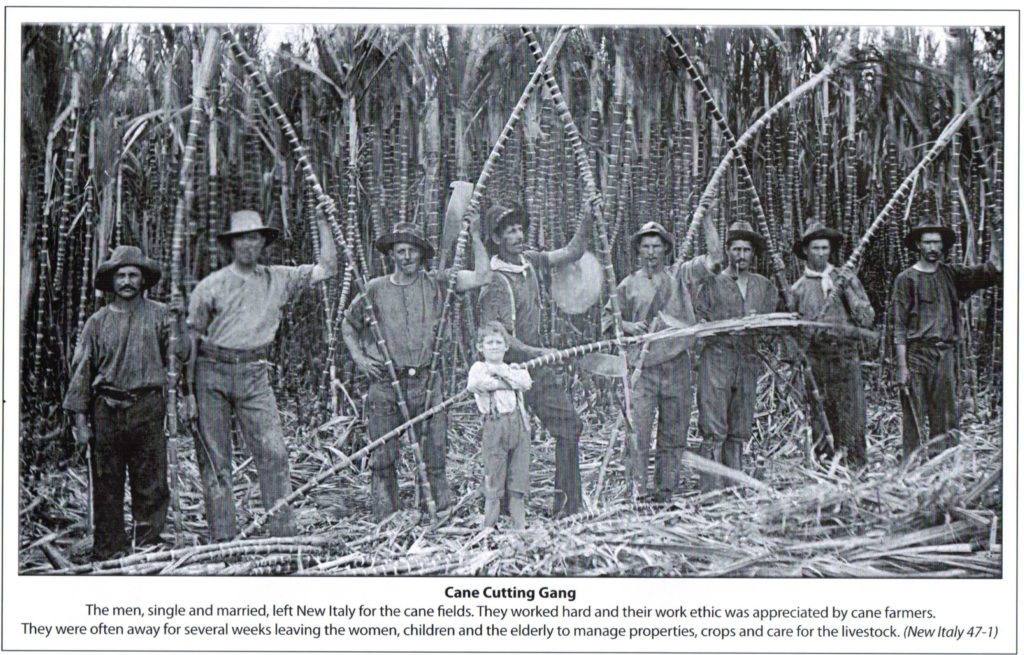 Thus the primarily horticultural work of growing and establishing small vineyards, orchards and vegetable gardens was initially achieved by the women at New Italy. 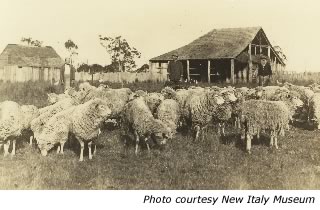 The settlers tried to make the most of their small parcels of land.

Unfortunately sheep could not tolerate this wet and humid environment. 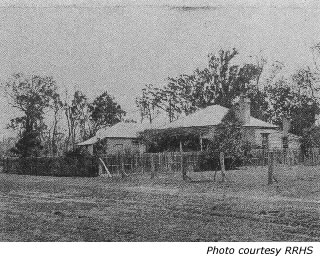 The Italian settlers built a vibrant community in an unfamiliar and challenging landscape.They built houses, a church, school and community hall in traditional regional style and organised work programs and social activities.

The school was opened in 1885 and remained the secular hub of the community for over forty years. It played an instrumental role in the integration of the Italian settlers into the wider North Coast community, helping them to succeed beyond the New Italy settlement when their means allowed it.

By the early 20th Century a small silk industry had been established at New Italy, winning awards at trade fairs in Chicago and Milan. 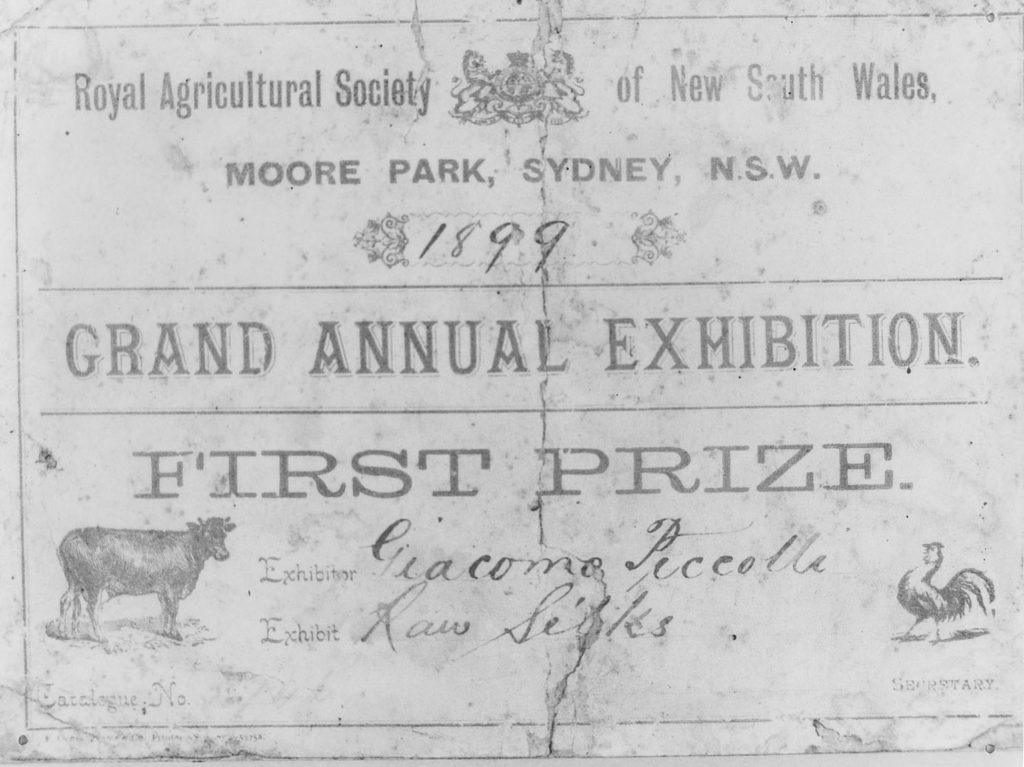 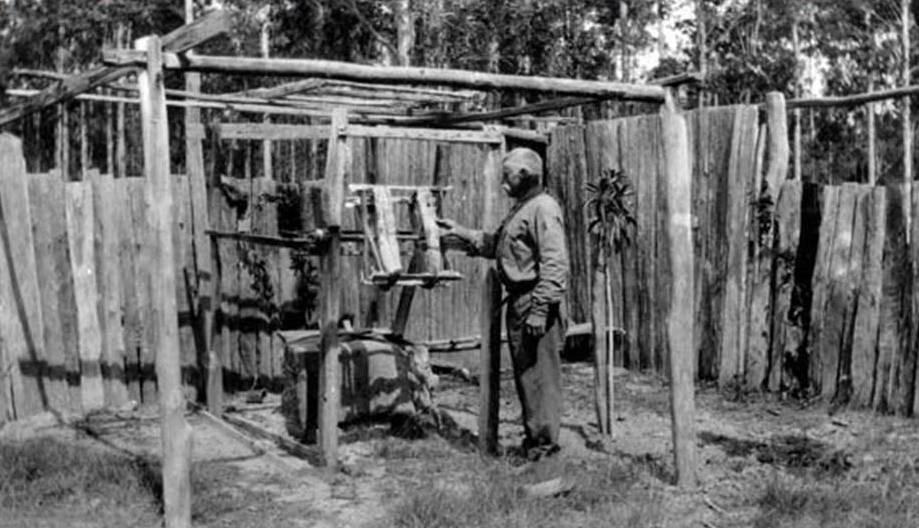 Remains of the original well dug by A. Roder, one of the first settlers. 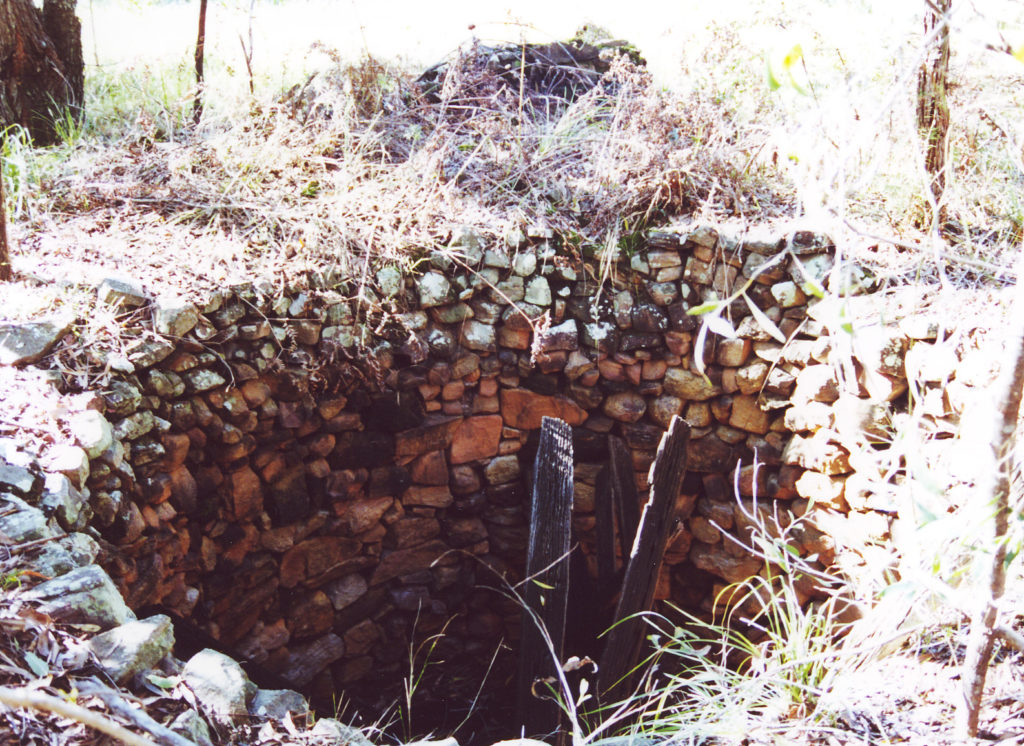 Your ticket for the: Primary Settlement