New Italy had its beginnings in 1880, when families of farmers from the region of Veneto in Northern Italy, were beguiled by the Marquis de Rays to purchase homes and fertile land in a phantom paradise of the Pacific named La Nouvelle France (an imaginary kingdom in the Bismarck Archipelago).

Cleverly worded advertisements spoke of sunshine, lush vegetation and beaches and the promise of freedom, not living under dictatorship. Despite warnings of the unsuitability of the proposed land and the Royal Investigation Bureau in Milan issuing a direction that no passport would be issued to any Italian participating in the scheme 50 families boarded the “India” in Barcelona in July 1880 (Niau, 1935). They were the third expedition to leave for the shores of Port Breton and were reassured with claims that two shipments of other people from elsewhere in Europe were already settled.

In October of that year, after a disastrous voyage, the expedition arrived at the promised land, Port Breton , only to be confronted with deprivation and death. Chaos now reigned, there was nothing prepared and no happily settled migrants. The supplies on the island were meager and grossly inadequate, while the promised well built housing was non existent.

On the 16th of December the two Captains (de Prevost and Rombardy), Mr McLauchlan (who had been a captain on a previous expedition) and Pere Lannuzel the Priest set sail on the ‘Genil’ to collect supplies from Sydney. The reasoning behind the choice of people on this trip is questionable, the top administrators and the priest forsaking a desperate community did not help with the morale of the Italian migrants.

The Italian’s spent four months at Port Breton, suffering the constant rain and impenetrable vegetation, struggling to find food and create shelter. Many suffered from fever and illness that their known remedies could not cure and many deaths occurred while there.

On the 20th of February 1881 the ‘India’ departed Port Breton to seek refuge and by strange fate the ‘Genil’ returned to the cove on the same day, although the ships never sighted each other. From Port Breton, the emigrants traveled to Noumea on the “India” but soon discovered their new location unsuitable also, as it was a penal colony. The “India” was then declared unseaworthy by the local authorities in Noumea and the emigrants were now stranded.

The Italian Consul in Australia heard of the emigrants’ misadventure via his colleague in Noumea and requested assistance from Sir Henry Parkes (the then Premier of NSW). As a gesture of goodwill, Sir Henry Parkes arranged for their rescue and chartered the “James Paterson” to collect the survivors. On 7th April 1881, 217 of the original 340 emigrants arrived in Sydney, destitute and in poor health.

Circular Quay, Sydney with the Exhibition building in the Domain.


This is the scene that would have greeted the
passengers of the James Patterson in April 1881. 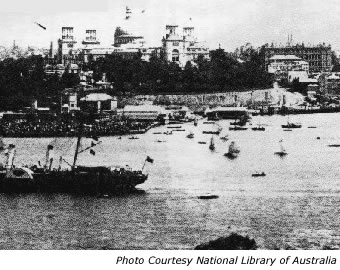 Your ticket for the: The Voyage