The Memorial phase of development at New Italy has its origins in the first local celebrations to remember the pioneers of New Italy in 1910. It continued with the establishment of a Park of Peace by Giacomo Piccoli in the 1930’s. Nevertheless it began a most crucial phase in the late 1950’s when the Richmond River Historical Society (RRHS) took an active part in recognising the broader regional significance of the settlement. In 1959 the RRHS prepared an exhibition of relics and records from the settlement, which was opened by Councilor A. Nardi, himself ‘a son of New Italy’. This created much interest and some felt there was a “desire to have a permanent memorial erected”.

The Park of Peace has been re-established at Historic New Italy, with a new tree being planted each year as a part of the Remembrance Day celebrations. 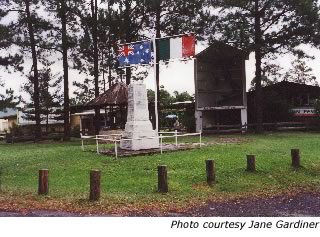 The site of Luigi Antionelli’s mud brick house and wine shop was donated by Mr A. Roder to house a memorial and on 8th April 1961 the monument commemorating the pride, courage and strength of the Italian settlers and their contribution to the north coast community was unveiled. Approximately 1500 people attended the function including the Consul General for Italy Dr. G. Carnevali, Mr Ian Robinson MLA for Casino, and local Mayors and Councillors

The monument commemorating the pride, courage and
strength of the Italian settlers and their contribution to
the north coast community is unveiled in 1961.

A letter from members of the original expedition to the Northern Star expressed appreciation to local historians specifically Mrs Louise Daley, Mr C. Ebert and Mr. G. Hall and the Richmond River Historical Society for initiating this event (Anon, 1961). With this broader acknowledgement of the achievements of their forefathers a committee, composed primarily of the descendants of New Italy and other local Italians, was formed to consider ways to celebrate the imminent arrival of the centenary of the arrival of the Italian migrants in Australia.

In April and May 1980 the ABC filmed the New Italy story through re-enactments and interviews for its Big Country series. In August of that year the centenary celebrations were held at the Lismore showground with over 8,000 people being in attendance. The New Italy Centenary Committee continued to function after the main celebrations at Lismore were over and organised several get-togethers at the New Italy Monument. In 1983, 5.7 hectares of land was purchase next to the Monument and the committee decided to build a Museum complex and plant a new Park of Peace.

In 1984 the Italian Consul General Dr Alvise Memmo laid the first stone at the entrance to the proposed new Park of Peace and planted a tree, continuing Mr Giacomo Piccoli’s tradition. Mr Spencer Spinaze MBE, who was President of the New Italy Centenary Committee at the time of the 100-year celebrations, received a Knighthood in the Order of Merit of the Italian Republic in recognition of his contribution to the Italian Pioneers (Anon, 1984).

The State Government provided a grant towards the cost of the building under the commemorative section of the State Bicentennial program in 1985 (Anon, 1985). It was not until 1989 that the Bicentennial Museum / Restaurant and mud brick house were formally opened. Again, a long list of State and local dignitaries attended the opening function.

In the same year Italian Government officials from World Expo in Brisbane were invited to visit New Italy by Dr Floriano Volpato, the new President of the New Italy Centenary Committee. Dr Volpato had a vision that the site could accommodate an Italian Pavilion in much the same style as the Pavilion at Expo, which would tell the history of 200 years of Italian migration to Australia. After visiting the site the Italian government presented the contents of their Expo Pavilion to the New Italy Centenary Committee. This gift included a working model of Leonardo Da Vinci’s self- propelled cart, structural steel, and other building materials. The Governor General of Australia, Mr Bill Hayden opened the Italian Pavilion at New Italy in May 1993. 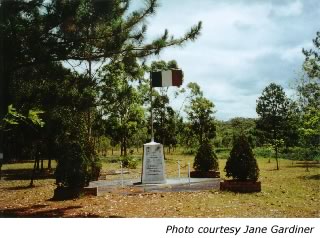 A memorial to Father Miazzi was constructed at the Catholic Church, North Lismore. When the parish closed it was decided to move the monument to the New Italy Park of Peace in 1991.

In 1996, the Committee’s activities continued both with the construction and opening of a community hall, and with their efforts being rewarded with receipt of a tourism award for the Museum Complex. In the following year the Museum won a New South Wales Cultural Tourism Award.

Trees have continued to be planted in the Park of Peace by various dignitaries and celebrations are held each year to commemorate Australia Day, and the anniversary of the Italian migrants arrival and descendents day. In October 1999 there was a special presentation of the Medal ‘Cavaliere della Repubblica Italiana’ by Italian Ambassador Dr Giovanni Castellaneta to Dr Floriano Volpato for his services to the community made at New Italy.

Dr Volpato had been a major driving force behind the activity at the New Italy Complex, a Complex which has come to represent not only Italians in Australia, but their achievements and accomplishments, as well as the joining together of the Italian and non Italian community to recognise and commemorate the contributions of those past and present. All those involved with the Museum Complex have felt his recent untimely death.

Nevertheless, celebrations have continued to be held at New Italy and the Italian Consul General Stefano Queirolo Palmas when visiting New Italy in May 2002 reiterated that “the New Italy complex…was an inspiring example of how Italians had made their mark on the history not only of the North Coast but the entire country” (Anon, 2002).

Your ticket for the: Memorialisation