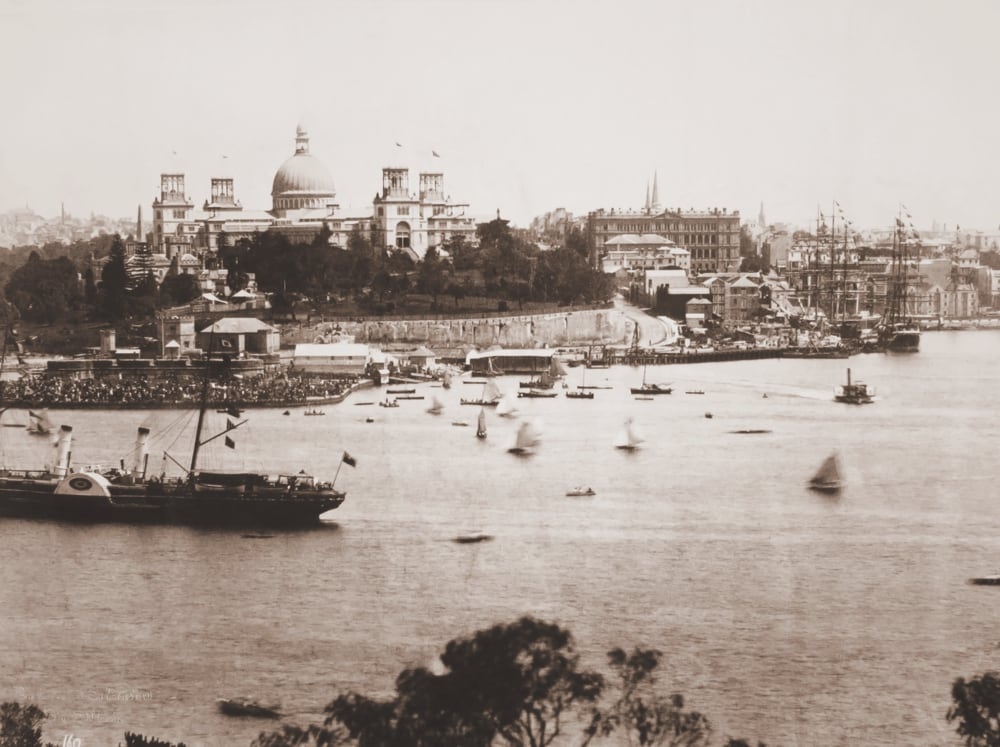 After their arrival in Sydney Harbour, the expeditioners would have seen the Garden Palace, in the south west corner of the Botanical Gardens. It was built for the 1879 Exposition and was the largest building in the Southern Hemisphere at the time.

On Friday 8th April 1881, the vessel was moved to Bradley’s Head cleared by Quarantine Officers, then moved to Circular Quay, in front of the Australian Steamship Navigation Buildings. By 5pm, the passengers had disembarked, and been moved to the Agricultural Hall in the Domain, immediately east of what was then an infirmary and became Sydney Hospital, 300m south of the Garden Place and 300m north of St Mary’s Catholic Cathedral.

Henry Parkes and the Italians’ arrival in New South Wales 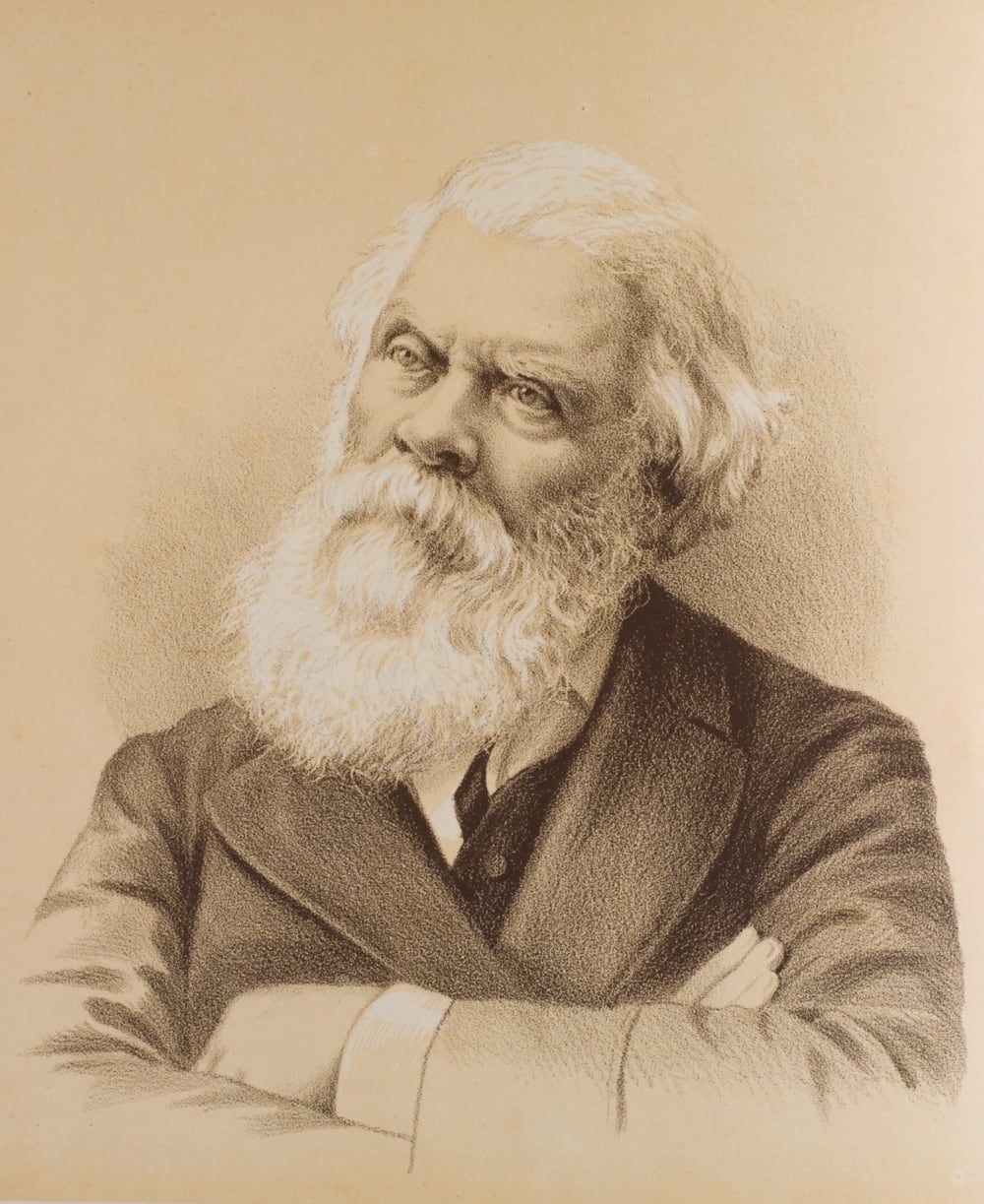 In 1882, Sir Henry Parkes, premier of the colony of New South Wales, was made commander of the crown of Italy by King Umberto. This was in recognition of Parkes’ decision to allow the remaining Marquis de Rays expeditioners to settle in Australia after their stranding in New Caledonia. It was late on 7th April 1881 when, one year since leaving their homes in Veneto, the Italians steamed onto Sydney Harbour on the SS James Patterson as ‘shipwrecked mariners’. The weary and grief stricken families, were welcomed the next day by Sydneysiders, who had been following their plight in the media for many weeks prior to their arrival.

Parkes decision to allow the Italians to settle in Australia was not taken easily. This was an era where immigration policy was firmly rooted in the preference to build a British, racially homogenous society. The newcomers could speak no English and had never planned to live in Australia. Parks established an official inquiry into their condition and prospects. It found that their agricultural background and firm resolve to create productive lives in Australia were sufficient reasons to allow them to stay. Parkes issued a notice that was translated and posted at their accommodation. It was intended for both the broader community to reassure any concerns they may have about these immigrants, and to advise the Italians of what was expected in return for being granted permission to remain in Australia.

Much to their initial despair, the Italians were required to separate from each other for one year to work amongst the colonists. Then, as the notice assured them, they could move and participate freely in Australian society.

50 years on, speaking at the New Italy Jubilee celebrations in 1931, Angelo Nardi outlined a history, which included Henry Parkes:

“He fed us and gave us good advice when we landed in Sydney, and took an interest in this for years afterwards… When he addressed us in the old Agricultural Hall in the Domain, where we were quartered, he asked us to be loyal to the King and country, and we promised him we would. I think we have fulfilled that promise.” ‘New Italy Jubilee’, the Richmond River Herald, April 10, 1931, page 148

Notice to the Italian Immigrants 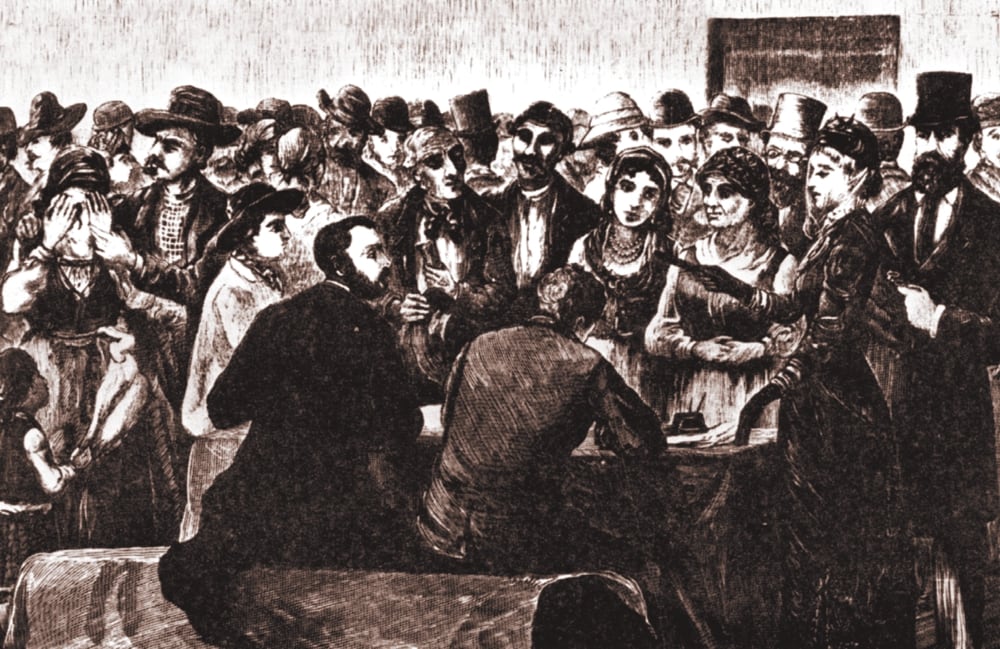 The Italians have come to this country, not at the insistence of this government, but owing to adverse circumstances beyond their own control. Seeing the distress to which they were reduced, the government offered them shelter and food for a short time and the means of entering into service for their own support… The customs of the country and their circumstances render it undesirable, indeed almost impossible for them to settle down together in one locality.

They need for their own welfare to get some knowledge of the English language, and to learn the ways of the English people, and this can only be done by their engaging with English employers. By taking this course, each married couple, or each individual, as the case may be, will be soonest able to see what is best for themselves; and after a year or so, they will have an equal chance with English people in the industrial callings of the country.

Though friends and relatives may have to separate they will be within reach of the post office and telegraph and no real hardship or privation can ensue to them from this cause, and they will only be doing as our own countrymen and countrywoman have to do on their first revival from England. The government wish it to be distinctively explained that the Italians are now and will be at any future time after fulfilling any legal engagement which they may enter into, perfectly free to take any course which they may see best in their own interests; but if they determine now to take a course contrary to the advice of the government, they must not expect to receive any further help from the government… Excerpts from Henry Parkes’ notice to the Expeditioners

One Year amongst the Colonists

The expedition survivors made it to Sydney. However, in return for being allowed to settle they must agree to split up and work amongst the colonists of New South Wales for one year. After that, they would be free to go wherever they chose. But what dread and heartache this must’ve caused to those who voyaged so far, to create a new community together.

A number of families and single people went to offers of agricultural work in Young. Other individuals and families spread across Campbelltown, Liverpool, Macquarie Fields, Manly – further out to Singelton, Wellington and south to Goulburn and Bowral. Girls aged between eight and thirteen found themselves amongst strangers as ‘nurse-girls’ and domestic servants – boys in jobs described as “generally useful”.

The Mazzers went to Parramatta, although Peter found work as a stonemason helping to build the second Macquarie lighthouse in Sydney, also known as the South Head Upper Lighthouse. Family stories recall the lengthy journey included the train to Redfern, horse coach to Darlinghurst and the last 9 km on foot. The young Angelo Nardi, then 14, also helped build the second Lighthouse.

Governor Lachlan Macquarie, commissioned Australia’s first lighthouse at the entrance to Sydney harbour, first lit in November 1818. Made of soft sandstone, it soon needed replacing. James Barnett, the architect of the replacement lightstation, would go on to design all the early New South Wales lighthouses, including at Byron Bay. Peter Mezzer and Angelo Nardi arrived just when assistance was required. Construction work started in 1881 and the Light was officially exhibited in 1883. At the time, the First Order Chance Brothers’ lantern was the most powerful Light in the world. 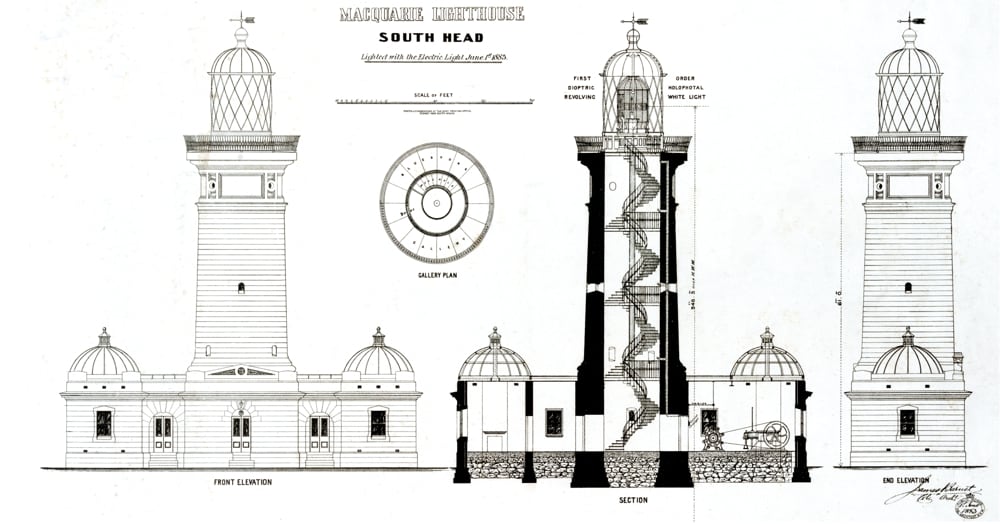 Expeditioners Peter Mazzer and Angelo Mardi helped build the Macquarie/South Head Lighthouse. These are colonial architect, James Barnet’s plans for the second Macquarie Lighthouse, built 3 metres to the west of the original structure so that a permanent light remained operational. The first lighthouse was then demolished in 1887. (from the collection of the State Library of New South Wales)

Your ticket for the: Shipwrecked Mariners